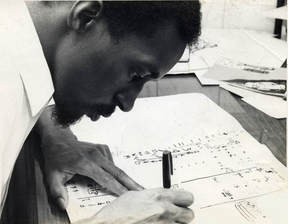 We’re thrilled to be guest artists for this year’s installment of Zeitgeist’s Early Music Festival! We perform on the March 23 performance of Julius Eastman’s hypnotic, minimalist masterpiece, Femenine. Here’s info on the whole festival. Zeitgeist is amazing!!!
Zeitgeist’s 8th Annual Early Music Festival explores the powerful contributions of our musical pioneers with a celebration of African American minimalist composer Julius Eastman. Eastman’s vibrant, virtuosic, and rhythmically aggressive music, and the racially and sexually charged nature of his work challenged the musical establishment and anti-establishment alike in the 1970s and 1980s, greatly impacting the trajectory of American minimalism. Lost after his death in 1990, Eastman’s music has been recently recovered is asserting its influence once again.
The festival will be preceded by two Lowertown Listening Sessions at Studio Z featuring performances and discussion of Eastman’s work led by experts in the field. On March 15, historian/composer Davu Seru will discuss Eastman’s musical activism in conjunction with a performance of Evil Nigger. On March 21, visiting author/composer/performer Mary Jane Leach will discuss her work recovering the music of Julius Eastman alongside a performance of Stay On It.  More info

Julius Eastman (1940-1990) was a composer, vocalist, and pianist. He was among a small number of 20th century African American composers who found their voice through the American experimental music tradition. Highly regarded as a performer and composer, Eastman was a member of the Creative Associates at SUNY Buffalo from 1968-1975 and part of the “downtown” NYC music scene of the late 70s and 80s. He created high-powered minimalist works, and was among the first to infuse minimalism with a pop music sensibility. He made bold social statements through his compositions, addressing bigotry and non-inclusion of African Americans and LGBTQ communities with his use of provocative titles (Evil N….r, Gay Guerrilla) and unconventional performance practice. A series of misfortunes and personal struggles left Eastman homeless in the mid 1980s, with much of his music confiscated when he was evicted from his home. Eastman died in Buffalo in 1990 at age 49.
+ Google Calendar+ iCal Export